Farm automation is here to stay. Learn how modern automation solutions will revamp the toolkit required of an ordinary agricultural worker and how far-reaching the changes will be

You can easily find a modern farmer spending more time looking up into the sky rather than gazing at the crops and soil below. No, they are not marveling at the blue scene with puffy clouds, full of promise for an ample harvest. They are watching the drones flying over their land and making sure their crops are safe and sound from tilling to harvesting. The ubiquitous implementation of custom software-powered agricultural drones is a small part of the farm automation practices that have been set in motion by the challenges today’s farmers face. Modern problems require modern solutions, right? The shift to automated farming is inevitable, and believe it or not, it’s not about cutting jobs. It’s about achieving better results as well as safer and more comfortable working conditions.

One of the most vivid justifications that farm automation is here to change the employment landscape in the agricultural industry is that this change is already being documented. The United States government has taken bold moves to help farmers struggling from the pandemic and the aftermath of urbanization. The approval of in-field robotics use is one of them. This is nothing to be surprised about, as human-based agricultural businesses are inefficient.

Indeed, the United States has seen hundreds and thousands of reported cases of agricultural employment scandals involving sexual harassment, discrimination, wage theft, and health and safety violations. In response, changes were made within the framework of implementing the H-2A visa reform, which envisages legislative and regulatory changes to better protect H-2A workers and their families by increasing agricultural practice safety standards.

Nonetheless, the American government has deemed that changes to H-2A visas won’t suffice, and the Farm Workforce Modernization Act is now in the Senate, promising to change the lives of American agribusinesses if passed. Farm automation will be a must, and it will surely change the way people work.

Automation in farming: How does it work?

Let’s cut to the chase. Two primary technologies stand behind farming automation: machine vision and IoT. Backed by GPS and GIS, which guide their movement in the fields, robotic farm automation solutions can create a virtual 3D model with the help of high-resolution cameras and sensors, which then help them navigate freely and perform tasks seamlessly.

Now, not all agricultural robots are fully automated. Remember: they are robotic solutions and not robots that have come here to make Megathron prevail over the Earthlings. Agricultural robots are programmed to perform various levels of automation, which makes crop management software play a crucial role in the configuration of automated farming robotics.

Humans will have to learn how to manipulate these robotic tractors, which on the one hand is quite a tall order. On the other hand, it renders agricultural employees’ lives easier, safer, and more comfortable. Navigating a tractor while sitting in a soft chair with a tablet in front of you is way more pleasant than going out into scorching fields in skin-drenching winds.

Farm automation will happen seamlessly, as we already have the technologies capable of bringing smart solutions to the table, such as automated greenhouse systems with profound analytics. There are three leading technologies that we can expect to see in the fields in the years to come: robots, autonomous machines, and drones. Each will represent another shift in the employment paradigm by altering the skills farmers require of employees, with GIS competence being the most significant.

The entire world is accepting GIS-powered precision farming with grace and gratitude, knowing that it will change and refine the way people produce, collect, distribute, and consume food. The projected expansion of global precision farming by 2025 is impressive.

Precision farming is surely going places. The benefits it offers are way too alluring for both companies and employees. And while you might think that these new benefits will set in motion huge job losses, you might be mistaken. After all, a little education never killed nobody.

Do you remember the 2005 classic I, Robot with Will Smith? Well, it might not be a classic, but there’s no accounting for taste, right? Just like Will Smith’s nemesis, robots in automated farming are here to substitute for people. In fact, robotic techniques will substitute for seeding, weeding, spraying, picking, and many other tasks and routines, which leaves humans with one single task: to learn how to service the robots.

Oh, and one more thing: don’t forget that robots are not necessarily two-footed humanlike creatures. They can come in the form of tractors, combines, and other types of machines. Automated farming robots and drones are there to deal with four major missions. 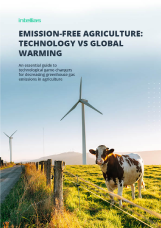 Seeding is where it all begins in agriculture, right? You can start to forget about walking an extra mile (literally) in the fields, as automated drone seeders have you covered. They are efficient and fast; ten drones can plant up to 400,000 trees a day. Hence, while drones are the major agents of crop quality and safety monitoring, autonomous precision seeding technology lies at the heart of change for those working in the agricultural sector of the future.

As you might have guessed, farming automation boils down to cutting down on the number of people out in the fields. GIS-powered precision weeding, powered by IoT robotics, is a way to ensure the crop makes it to harvest safe and sound.

All plants and crops have their own features when it comes to ripening. Some do it faster; some do it slower. But they all need to be picked one day or another. How can we know when the day comes and how can we know in which part of the field to harvest? Another thing is that many berries, fruits, and vegetables are quite tender and fragile, often suffering from human handling. Hence, precision picking is now being used as one of the main tools for accelerating and increasing the efficiency of the picking process.

Rise to the market occasion and deliver results with our custom agricultural software development services. Get the power of data on your side and work smarter, not harder

Have you ever heard of indoor growing, or so-called vertical farms? You may end up eating salad tonight that’s been seeded, grown, and picked in a vertical farm. Smart vertical farm lighting and monitoring solutions are transforming agriculture, as vertical farms can be fully autonomous. Indeed, it might take just five to ten employees to take care of an entire farm. For example, the Iron Ox company boasts of running a fully automated 8,000-square-foot farm. Shields of hydroponic trays and cloud-controlled robots take care of the leafy greens that seem to be ubiquitous. And yes, smart LED lights substitute for the sun, while such farms use 90% less water than their conventional counterparts.

How farm automation will lead to demand for new skills

Now that we know that agricultural automation will come in four major modes — seeding, weeding, picking, and non-traditional farming — let’s define the skills that those wanting to continue their agricultural employment will have to acquire in the long term. First and foremost, you must understand that the question is not how to make an automatic farm. The situation the industry finds itself in focuses on integrating automation in agriculture into manual labor to achieve the best result possible. We are still far from omnipresent full-fledged automatic farm systems. Agricultural professionals must acquire five basic skills:

Robots are not here to cause a farming condition overload; they are here to help people become more advanced, cleverer, and more productive while being physically idle. The Association for Advancing Automation calls farm workers of the near future fleet managers taking care of robotic farming systems and autonomous vehicles.

Modern workers will develop new equipment functions, take control of equipment movement, or simply turn equipment on and off (oh, those old but gold IT support days). The principle at work is simple: the more functions devices will have, the more attention they will need from humans. Also, devices will require maintenance. The more devices there are, the more service personnel farms will need.

It’s not about removing people at all; it’s about changing the scope of responsibilities and boosting safety. What’s more, robots are only executives. Agricultural science and complex decisions will still fall on humans’ shoulders. All those machines are to be built, sold, and repaired before they oust humans, right? Finally, all the data collected by robots and drones will require human analytical skills. The machines are here only to refine automation in agriculture by letting people make accurate decisions on land erosion, crop health, water runoff, and many other aspects.

Farming automation solutions: Not to blame but to embrace

Before we move to the discussion of solutions that new agricultural automation technologies offer, let’s come to terms with one thing: farming digitalization is not to blame for the shortage of jobs in the agricultural sector. On the contrary, it’s one of the major agents of positive change, advocating for more rights and safety for agribusiness employees. If you’re still wondering whether change is due, let’s have a look at the number of active IoT connections in agriculture across Europe.

Source: Number of active IoT connections in agriculture in millions in the European Union as per IDATE DigiWorld

The world is embracing IoT, as it does not deprive people of their jobs. Instead, it saves them from being exploited and lets them gain new skills, become professionals, and secure a better, safer, and more stable future for their families. The only challenge that lies ahead is to learn something new that automatic farm systems require of them.

How will farm automation make the lives of those in the agricultural business easier, regardless of their position? There are quite a few places where robotics might come in handy when transforming agriculture.

It looks like there actually is something special about farmers who wonder how to make an automatic farm. Automation in farming is all about protecting people from exploitation and teaching people new things that will, at the very least, grant them unique knowledge and experience required for further employment.

Farm automation is not something that came out of the blue and started forcing agribusinesses to adopt it using sticks rather than carrots. It has resulted from a long-lived process of introducing digital technologies into the agricultural industry, which has eventually proven that farmers are better off with automated solutions than without. As we enter the third decade of the 21st century, farming automation solutions are only going to double their presence on farms, simultaneously changing the role people play in the farming process. Yet there’s no need to worry. No job loss is intended, as farming automation is rather about enjoying the process and being sure of the result your fields provide and not about farming condition overload. Yes, jobs will change their essence, but they will still be there: safe, legal, and advanced.

If you’re interested in moving faster than your competitors or the weather forecast, contact us. We have the solutions you need and can come up with new ones should the need occur.

Rate this article
No votes Thank you for your vote. 39877 8338e4cf7e
Tags
Agriculture
You may also like 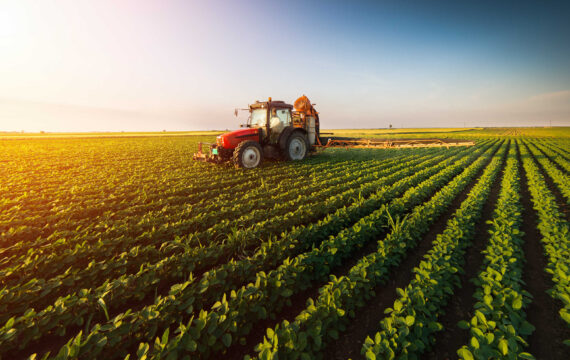 How to Apply Location Technology in Agriculture 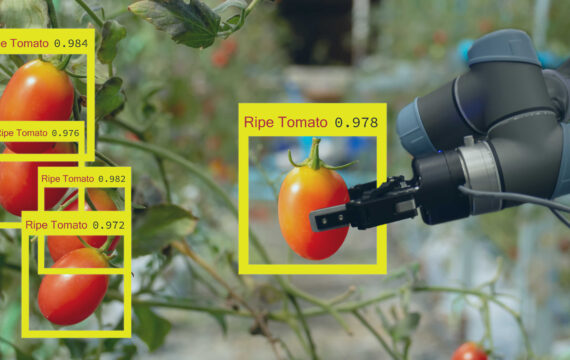 Artificial Intelligence in Agriculture: Rooting Out the Seed of Doubt

How to Apply Blockchain Technology in the Agriculture Supply Chain?